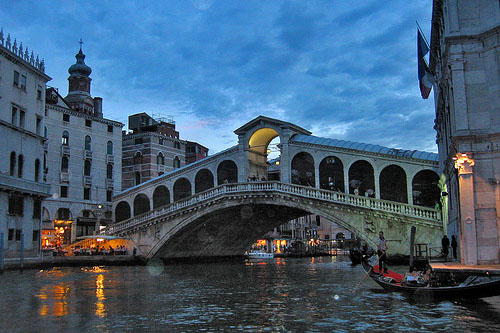 Venice is quite simply one of the most beautiful cities in earth, but visit it with care — it’s expensive, difficult to navigate and its 55,000 residents are joined by 22 million visitors each year. Head for Venice as a special treat; leave the kids at home, be prepared to do some canal-side walking and wallow in its extraordinary loveliness. Even a romantic weekend break in Venice requires forward planning: book major attractions online to skip lines. Rise with the lark to reach the 11th-century Piazza San Marco ahead of the crowds — it’s at its most ethereally beautiful in the early morning with views across Venice Lagoon. Grab an espresso at Caffè Quadri before touring the highly decorative Basilica di San Marco. Its ornate interior drips with gold, glass, and marble and is adorned with mosaic; the golden Byzantine altarpiece is studded with gems and the four bronze horses guarding the basilica are copies of the originals inside. Next-door is the spiky Campanile (bell tower), at 325 ft (99 m) Venice’s tallest structure. It was finished in the 16th century but collapsed in 1901, only to be rebuilt brick by brick. Take the elevator to the top for panoramic views across the lagoon. Move on to the Palazzo Ducale, the home of the Doges who ruled Venice for a millennium. Built in pink marble atop arched loggias of white stone, the palazzo’s Gothic façade hides sumptuous salons designed by Palladio, major artworks by Veronese and Tintoretto, medieval weaponry and the Doges’ private apartments. Adjacent is the infamous Bridge of Sighs, connected to the prison. Meander the waterside Riva degli Schiavoni to San Zaccaria, browsing for lunch spots as you stroll. Catch vaporetto 41 (buy a Tourist Travel Card for free ferry travel) to Murano for shops full of rainbow-colored Venetian glass and spend the afternoon exploring tiny canals and narrow lanes lined with medieval houses. Check out the lovely Basilica dei Santa Maria e Donato, discover the history of glassmaking in the Museo del Vetro and buy a souvenir piece — but don’t expect many bargains. At nightfall devour plates of pasta at a Murano trattoria and catch the vaporetto back to the mainland. Next day means another early start at the landmark Rialto Bridge, opened in 1591 and the first stone bridge across the Grand Canal. At it northern foot lies the city’s commercial heart, home since medieval times to two covered food markets with stalls spilling onto the streets. The colorful Erberia sells fresh produce and flowers, the Pescheria fish brought in daily by barge. Pick up breakfast on the hoof from the market and walk through atmospheric San Polo to the glorious church of Santa Maria Gloriosa dei Frari for its cracking collection of works by Titian and Donatello. The late-Renaissance Scuola Grande di San Rocco close by hides one of Venice’s artistic highlights — Tintoretto’s masterly cycle of religious frescoes, commissioned in 1564; highlights include The Temptation of Jesus and a splendidly moody Crucifixion. Grab a pizza in Campo San Polo and wander northwest through the photogenic alleyways and squares to Piazzale Roma (Venice’s main transport hub) in Santa Croce. Take a cruise down the Grand Canal, chugging past numerous beautiful palazzi and churches. Stop off to investigate the Venetian art in the Galleria dell’Accademia and the Baroque beauty of Santa Maria Salute at the mouth of the Grand Canal. Eat well-priced cichetti (Venetian tapas) at a backstreet bacari before falling for Venice’s romantic — and expensive — charms and taking a sunset gondola ride from Piazza San Marco. By: Sasha Heseltine

Touring Europe with a Conscience