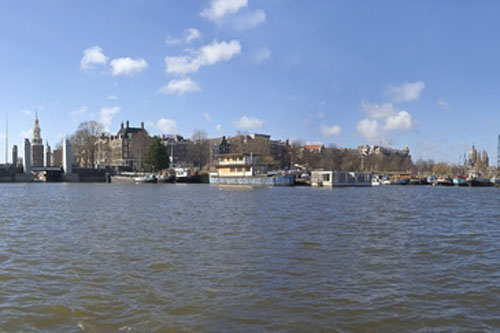 Although it’s easy to spend weeks exploring Amsterdam, the city is compact enough to enjoy in a weekend vacation and families with young kids an easily navigate it on foot – if toddlers tire a comprehensive tram system can come to the rescue. This compact, laid-back city’s modern life began with its massive canal-building scheme in the 16th and 17th centuries, as the Dutch pushed their trading routes out across the world. Any exploration of Amsterdam should start with a canal cruise (free with the discounted I amsterdam City Card) from the pier in front of the ornate 19th-century edifice of the Centraal Station. It’s fun for kids and routes take in the imposing mansions of the Golden Bend on Herengracht, spectacular view of seven bridges on the corner of Reguliersgracht, and the Skinny Bridge across the River Amstel as well as the contemporary architecture of the IJ waterway. Second stop is a 10-minute walk away down Herengracht; the Canal House Museum is one of Amsterdam’s most entertaining attractions, romping through the development of the Grachtengordel (Canal Ring) in a fast-paced exhibition full of sound-and-light installations, interactive media, music and movies. Afterwards take a pit stop for bitterballen (stuffed meatballs) in a café on the Nine Streets (Negen Straatjes), which are lined with smart independent boutiques. From there, it’s an easy stroll to the Anne Frank House on Prinsengracht, where a Jewish family hid from the Nazis in a secret annex during World War Two. They were betrayed and Anne’s diary was published after her death at Auschwitz in 1945; her tragic story has international appeal and lines are alwayslong, so book a timed slot online in advance of visiting. Jump on Tram 17 to head for the Rijksmuseum, a treasure house of Old Master paintings plus fine silver and glassware belonging to Amsterdam’s all-powerful 16th century guilds. Walk up to the Hampshire Hotel-Amsterdam American on Leidseplein for cocktails in its Art Deco bar before heading into bohemian Jordaan to surf traditional brown cafés along the tranquil waterways. Rise with the lark the next day to face the scrum that is Waterlooplein flea market and stroll round the corner to the Rembrandt House Museum to learn how Holland’s most famous artist lived and see copies of his most famous works; for a mid-morning breather, sneak in a quick Dutch beer at the charming and crooked canal-side Café du Sluyswacht. No trip to Amsterdam is complete without seeing something of the Red Light District’s dark alleyways and infamous red windows, so combine this with a visit to the 800-year-old Oude Kerk – scene of intrigue in bestseller The Miniaturist – for its stark, stone interior, and the Ons’ Lieve Heer op Solder, a newly restored secret church tucked away at the back of a 17th-century townhouse façade. Sample a dim sum lunch in Chinatown and take trams no 1, 2, or 5 from Stationsplein to Museumplein to sample the peerless modern art in the Van Gogh or the Stedelijk museums. For an authentic night-time taste of multi-cultural Amsterdam, seek out one of its Indonesian restaurants and sit down to a rijsttafel banquet. Surprisingly, given its reputation for drugs, prostitution and seedy nightlife, Amsterdam is packed with kid-friendly sights. So if you’re traveling with children, swap some of the following into the itinerary above: the colorful ethnological displays at the Tropenmuseum Junior; the interactive experiments at Science Center NEMO; the Dutch Resistance Museum Junior; and Artis Royal Zoo, which is just across the road. **Written by Sasha Heseltine

Make the Most of a Weekend in Florence

5 Worthwhile Tours to Take in Chicago