Make the Most of a Weekend in Florence 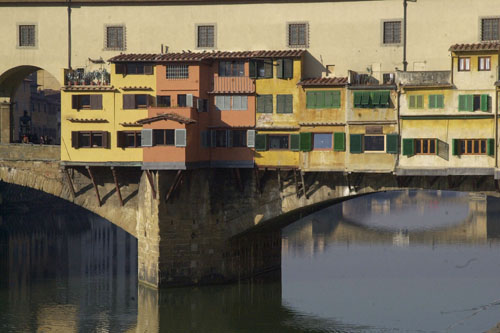 As the repository of the world’s most outstanding collections of medieval and Renaissance artwork, Florence is a masterpiece in itself. Here’s how to make the most of a weekend visit. Seven million visitors descend on Florence’s absurdly beautiful but pint-sized centro storico annually so travel tip: decide what to see and stick to that itinerary. The best time to travel to Florence is spring or fall and even then it’s best to rise with the lark to beat the crowds. Buy the family-friendly Florence Card, which entitles holders to beat the lines and give them, plus a child under 18, free museum entrance. Come Saturday morning, enjoy a standup breakfast of pastry and espresso at Caffè Gilli and sneak in early to see the Michelangelo sculptures on the marble tombs of the Medici grand dukes in the Cappelle Medicee. Cross to the Palazzo Medici-Riccardi and discover jewel-like frescoes by Gozzoli in the first-floor Cappella dei Magi before harvesting the stalls in Mercato Centrale for lunch on the go. Cherry pick among the designer delights on sleek Via de’ Tornbuoni or admire the delicate frescoes by Fra Angelico in the Museo di San Marco before wandering the pedestrianized lanes to Florence’s show-stopping Duomo. The façade of this medieval fairytale confection is smartly striped in green and white; Brunelleschi added its terracotta dome in 1418. From there, take in the famous bronze Ghiberti doors on the cathedral’s octagonal baptistery and peek inside to see its décor of gleaming Byzantine tiles. Giotto’s tower forms the last of this fine triumvirate of sacred buildings; completed in 1337, it’s a steep, 400-step climb to the top for unrivaled views across the brick-red rooftops of Florence. Neck a well-deserved aperitivo in Piazza del Duomo and dive into the enticing backstreets for a pasta supper in one of the many buzzing neighborhood trattorie. Book online way ahead of time for Sunday morning’s visit to the Uffizi Gallery and the world’s most important collection of Renaissance paintings. Designed by art critic Giorgio Vasari in the 1500s, the gallery’s highlights come thick and fast: altarpieces by Giotto and Cimabue; fabulous portraits by Piero della Francesca; mind-blowing works by Botticelli, Leonardo, Giotto, Raphael, Titian and Caravaggio. Dip into the Vasari Corridor, the underground passageway that connects to the Palazzo Pitti and is hung with more Renaissance art treasures. Cross the River Arno via the medieval Ponte Vecchio, now lined with expensive art galleries, to charming Oltrarno. Lunch in Piazza Santo Spirito and then explore the treasures of Palazzo Pitti, the long-time home of the Medici grand dukes, which has major collections of Renaissance and 20th-century art, silverware, Gobelin tapestries and frescoes. Take a breather in the surrounding Giardino di Boboli, laid out in formal Renaissance style by Niccolò Tribolo in the 1540s, but with many Baroque grottos, sculpture and fountains added. Make a final stop in the church of Santa Maria del Carmine for the peerless fresco-cycles in the Cappella Brancacci. The Life of St Peter was painted by three of the greatest early Renaissance artists: Masolino began the work in 1425; his pupil Masaccio took up where he left off; and Filippino Lippi finished the scenes 50 years later – they are considered so important to the development of western art that even Michelangelo visited the chapel to study the frescoes. Wind up a whirlwind weekend in Florence over supper in a restaurant overlooking the river. By: Sasha Heseltine