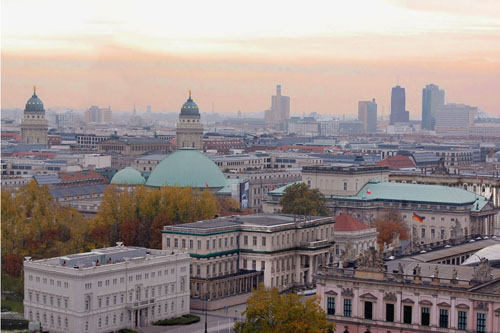 Berlin is living history, torn apart by war and now commemorating the dark years of the 20th century while getting on with the business of being the coolest city in Europe. Whether it’s a city break of 24-hour partying, visiting edgy galleries, trawling the war-related sites or discovering artistic treasures in the museums, Berlin is a year-around vacation destination. Where to start? The iconic Brandenburg Gate. Erected 1791 and topped with Johann Gottfried Schadow’s statue depicting the Goddess of Victory driving a four-horse chariot, the gate was shipped off to Paris by Napoleon but was returned in 1814. Over 150 years later, it was trapped on the eastern side of the Berlin Wall from 1961 to 1989; today it is the city’s best-loved monument and meeting place. Next up, book in advance for a tour of the Reichstag, the HQ of German Parliament. Burnt down by Hitler, wrapped in paper by artist Christo, and redesigned, it is one of the biggest crowd-pullers in the city, topped by a glittering glass dome by architect Norman Foster. Head for its spectacular roof-garden restaurant for lunch with a bird’s-eye view of central Berlin. Take time out in the Tiergarten, a grand city park dotted with monuments and covering more than 500 acres. A stone’s throw away is the Gemäldegalerie, which holds one of the world’s great collections of 13th-18th-century European art. It is a treasure trove of Titians, Raphaels, Botticellis, and Caravaggios plus exceptional Dutch Old Masters including nearly 20 showstoppers by Rembrandt. The Gemäldegalerie forms part of the Kulturforum, a cultural center built in the 1950s and offering galleries, museums and concert halls. Book in advance for concerts at the Berlin Philharmonic or wander up to Unter den Linden, a showy shopping boulevard lined with grand Prussian mansions that is a mecca of bars and restaurants. For a day submerged in Berlin’s 20th-century history, start at the Memorial to the Murdered Jews of Europe — 2,711 faceless, stark concrete pillars created by US architect Peter Eisenman. From this powerful memorial, head for the Topography of Terror, located at the former HQ of the Nazi Secret Police; this free exhibit chronicles the horrors of the Holocaust. Detour to Checkpoint Charlie, the best-known border crossing and scene of outlandish attempt to escape from east to west — despite dogs, searchlights and armed guards. Within walking distance is Berlin’s Jewish Museum, designed by Daniel Libeskind and opened in 2001. The building resembles a broken Star of David and the Holocaust is symbolized by an echoing concrete tower approached by underground tunnel; collections highlight the importance of the Jews to Berlin’s cultural life before the rise of Fascism. Next stop is the Berlin Wall Memorial; take the U Bahn from Hallesches Tor to Bernauerstrasse to see the longest remaining stretch of the sinister wall that went up virtually overnight, brutally dividing communities; it immortalizes the Cold War period between 1961 and 1989 when Berlin was torn between capitalism and Communism. Grab a snack from street stalls nearby. Cherry pick among the five fabulous offshoots of UNESCO-listed Museum Island (entry free with the Berlin Welcome Card) in the River Spree: Byzantine art in the Bodes; 19th-century art in the Alte Nationalgalerie; classical antiquities in the Altes and Neues museums; and eastern antiquities in the Pergamon — Berlin’s most popular museum. Head along Mühlenstrasse to the East Side Gallery; this famous section of the Berlin Wall is the world’s largest outdoor art gallery, covered in cartoons and political comment. Spend the evening in cute Nikolaiviertel, a mock-medieval quarter built in the 1980s full of tiny gabled houses and a great choice of restaurants. By: Sasha Heseltine