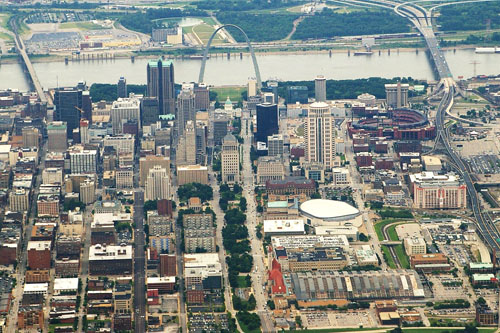 Probably best known for the famous Gateway Arch, opened in 1965, St Louis is steeped in a rich and colorful history. Prior to being owned by both Spain and France, the area that is St Louis was home to more than 20,000 people known as the Mississippians - a civilization of mound builders. In fact, one of St Louis' earliest nicknames was 'Mound City.' Named for Louis IX, the Crusader King of France, in 1764; St. Louis was eventually sold by Napoleon to President Thomas Jefferson in the Louisiana Territory purchase in 1803. You'll see references to Lewis & Clark (including a museum at the bottom of the arch), because of their role in turning St. Louis into the 'gateway to the west' - the last stop for those traveling to the west to explore a new frontier. Today, St. Louis is a vibrant city with a population of about 319,000. Not too big, and not too small, St. Louis is family friendly and offers a myriad of attractions such as the zoo, art museum and science center with free admission.